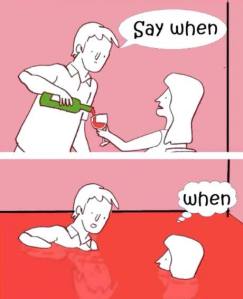 There’s REALLY never a good time to tell people you love that you’re f*cked up.  But there does come a point when it becomes easier to do it.  Then, if you’re lucky, it becomes such a part of you that you tell anyone at any time, and I truly mean you are lucky if you make it to this point, a lot of people never do.

“Oh you have an uncle who is an alcoholic?  That’s really super interesting.  Has that been fun for you?  What’s he like?  Maybe I know him from our club of insane people.  Thanks for trying to relate to me!”

Ok, so we actually DO have a club, but some people don’t quite get that joke.  I’m not sure they should either.  But you don’t have to know me.  You don’t have to relate to me and you don’t have to pretend to understand what it is like.  There might be an outward appearance of slapstick humor and quick one liners about the whole thing, but that’s just because the truth of the situation is sad and painful and hurts people.  It’s not fair in this instance to speak anymore in the plural form because while there is plenty of humor here, I don’t want to speak for anyone else.  I was able to stop drinking years ago, but not everyone is so lucky.

“i should quit drinking too, I drink too much”

If you tell people you are an alcoholic, get ready for this one.  Well how do you like to get drunk?  More importantly, how do you like to drink?  “It’s drinking time, boys!”  “It’s 5 o’clock somewhere” (is there a dumber f*cking phrase in the English language?)  You want to research and answer the drinking questions on yourself?  Go right ahead.  But you telling me you need to quit or cut back or whatever it is, that’s like me walking up to Ted Bundy and saying, “I sure can hurt people sometimes too, perhaps I should cut back.”  Maybe you smile or laugh at that analogy.  Well, I’m not.  (Ok I am AND I giggled when I realized the pun in there about cut back too.  When you think about that it also clearly speaks to my insanity in giggling at a pun inside an analogy comparing my own hurtful ways to one of the worst mass murderers in history.)  Anyway, that sh*t is true though.  You “drink too much” is a problem?  Well then figure it out, pal, but I have my own questions for you.  Lets call this next section:

that sh*t is funny……

The stories I tell are ones of good times and crazy moments.  I’m f*cked up, but who wants to hear about someone pissing in their own bed at the age of 30?  Well that DID happen, but it’s funnier when you tell the story about pissing the bed at age 22, the “bed” is a bunk bed, you’re on the top bunk and your buddy is on the bottom bunk.  Then the despicable become laughable, yet, the reality of the situation is that they are both actually just sad.  At a birthday party the joke gets more outrageous as each gift is opened and it is another bottle of vodka.  Everyone enjoys the gag and it is actually rather comical that at my birthday party I got 9 bottles of vodka.  The comedy seems to vanish quicker than the week and a half it took me to finish them all, except 1, which made it up to the last day I used it.

Let me be clear that I am not trying to create some sort of environment here that requires sympathy or pity.  I don’t want that at all.  I’ve seen plenty of “those looks”.  I’m just saying there is the surface and there is something underneath.

but when you put it that way, it’s not that funny

I may need to get real here.  I don’t even know if anyone will read this, but maybe someone does.  Even more so, maybe someone who actually questions his or her drinking reads it and I have to at least speak to that person.  I am that person.  I will always be that person.  I am different and I do things differently than other people.  But one day things did change for me.  This is no happy story, my friend.  I didn’t slam a drink down on the bar and say “I have had enough.”  My first moment came with a blood soaked shirt, a psychiatrist and a lot of tears on the faces of the people I love the most.  And that shit ain’t f*cking funny at all.

So if you want to relate, then let’s relate.  Do you know a plumber?  (If not, just play along.)  I don’t know any plumbers personally, but if I did and I happen to be speaking to another plumber, I’d probably say “Oh, my so and so is a plumber.”  Not knowing any plumbers personally I can’t say for certain, but if I did and had this conversation and made this comment I would imagine that plumber would have no more to say to me after the comment in particular than he did before I made the comment.  This is such a funny human trait that I am guilty of myself.  But when we speaking to another human being we do not know we look for relatable material to pass the time while we converse.  For some reason, we naturally relate by telling each other we know someone who does what they do or knows what they know or whatever.  Yet most of the time knowing that person gives us absolutely no more material to discuss with this stranger.  To be clear, I believe support and compassion are two of the greatest things on earth.  I just find us humans funny sometimes how we try to find the ways to do that.  So let me start the conversation by stating that I am an alcoholic, I’m a drug addict.

i have a great life idea!

“It sure is a pretty day outside today,” says no drug addict who isn’t high.  You see, I am a drug addict.  I like to use drugs to get me high.  I use the term drug referring to alcohol as well as other substances.  One I get those substances in my body I can focus on you.  THEN I can tell you it is a nice day out.  If I am high, I can sit here and tell you the f*cking opera is worth the money.  I don’t care about it.

I wouldn’t say I decided at a very young age to grow up and f*ck everything up with alcohol and drugs.  I would not say that.  My son had to fill out a sheet for pre-school about what I want to be when I grow up.  He picked a Ninja Turtle.  I didn’t read all of the class’s entries, but I didn’t see “town drunk”, “pothead” or “deadbeat drug addict” for anyone’s answer.  I guess I should have since I could have possibly at least been the one kid in class to fulfill his self-appointed destiny.  Main problem is, I wouldn’t have cared anyway.  This brings me to my last point……

There is a certain kind of pain reserved in life when it comes to aspects of love.  Have you ever loved someone so much before but you couldn’t tell them?  Perhaps they were in love with someone else, perhaps YOU were also in love with someone else at the same time, if you believe that to be possible.  For the point of this section, I’ll ask you to try and follow even if you have not.  When you love someone that much but cannot tell them, ever, it hurts real badly.  You want to be around them SO much and SO often, but you can’t and you need to be careful because if you let on too strongly they may become afraid and retreat.  You’re in a terrible, friend-zone-ish place that you will struggle with every single day and not be able to tell one person about it, because you will be shunned, you will be made to feel like your feelings are wrong or selfish.  But you know you love this person.  There is something about them that makes you smile at the very thought of their being.  You fantasize about a different dimension where you are able to be happy together.  You know that there are a handful of factors that may swoop in and take this person from you at any point in time.  This person is everything you ever thought happiness could be and you can’t understand why fate would play the cruelest joke in the world on you and put them in your life in a capacity where you can never be with them yet you must be around them constantly.  You also thank fate for giving you at least this.  Your insanity grows more and more each day as you struggle with whether or not to come clean……

this post is about a girl?  it’s about a crush?

No.  Well, if you want me to make the worst, most awful joke ever, it’s sort of about Mary Jane or Cindy Smirnoff I guess.  But my point was that’s what it’s like to be a drug addict.  At least for me.  It was a constant struggle of getting enough but not too much so people could tell.  You wish you could live without fear of judgement if people knew.  You can’t understand why you were given this terrible affliction, but you can’t imagine living without it and you know you are one discovery away from it being possibly taken away forever.  You dream and desire to be high when you’re not and when you are high, it’s rarely enough and may God be with you if the drugs stop working because there is no worse place on this planet than that.

You’re not sad.  Don’t be sad.  Remember the jokes, remember the funny.  Embrace your faults, embrace yourself for who you are.  I was a craptastic, selfish, rude, a**hole addicted to alcohol and drugs and look at me now, I cut out the alcohol and drugs!  Life IS sad.  But not always, I hope.  But the sad is what can also bring us to happy sometimes.  You don’t know me because you’re a drug addict like me, but you can still get to know me.  Just remember that when we meet, and I tell you I am an alcoholic, don’t tell me about your cousin, feel free to ask me what it’s like being an alcoholic.  Then maybe we can actually get to know each other and have a real conversation.